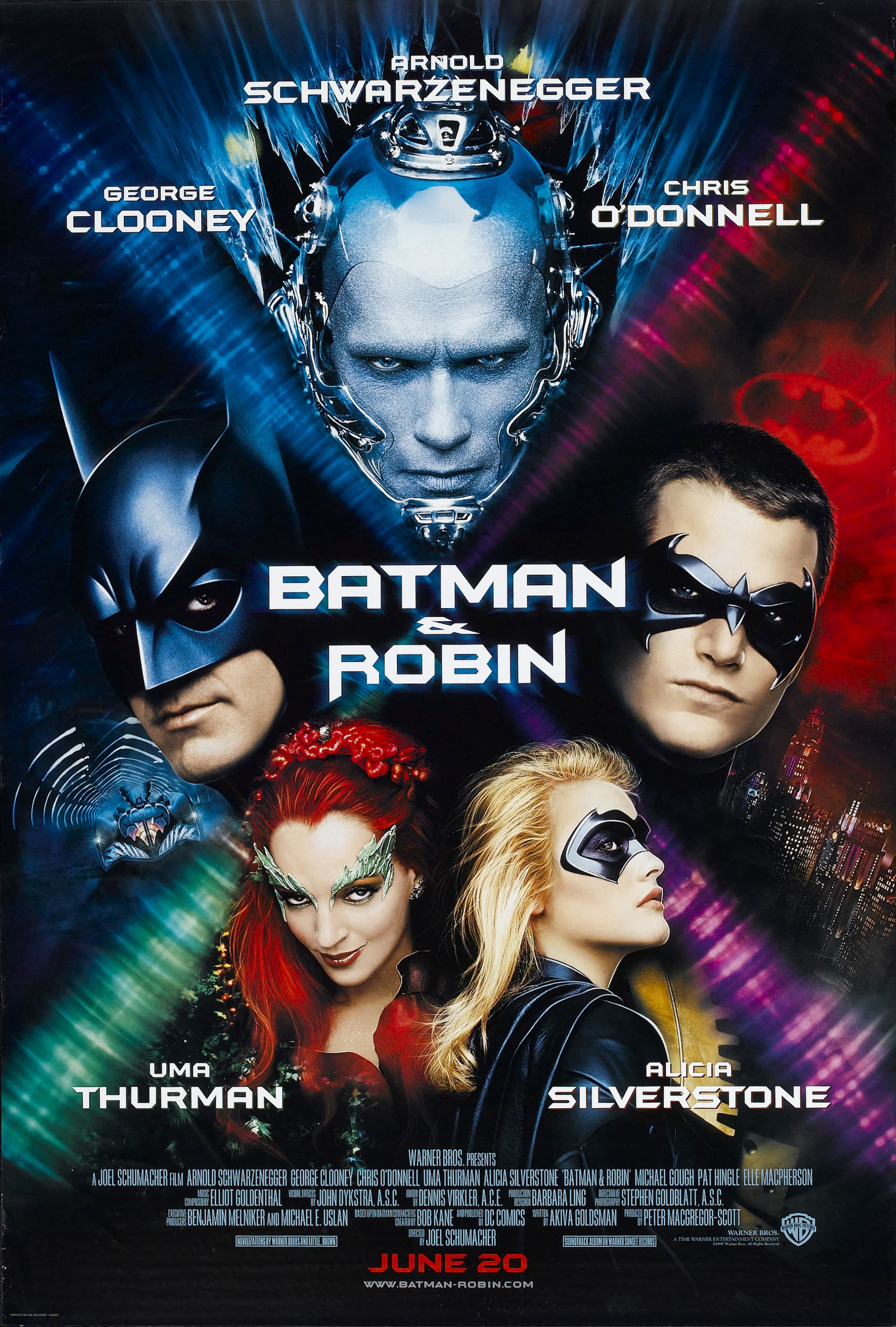 If Joel Schumacher’s Batman & Robin was trying to be a big screen adaptation of the camp 1960s Adam West version of the character, or a spoof on superhero movies and Batman in particular, there would be a lot that works about this movie. Unfortunately, this is clearly not the case. This is designed to be a sequel to Tim Burton’s Batman movies and Schumacher’s own Batman Forever but for whatever reason, the tone of the film completely shifts into the comical and silly.

This isn’t a gradual shift either. This is something that happens from the moment the heroes are on-screen. The customary “suiting-up” has two very clear and prominent shots of their backside and the first pieces of dialogue said by Batman and Robin are jokes. The script is full of poor attempts at one-liners or puns, with principle villain Mr Freeze managing to recite as many different “frost” or “ice” variations as is possible.

Unfortunately, the rest of the film follows this silly structure. Batman carries with him a “bat-credit card,” the pair have ice-skating blades built into their boots and play ice hockey with a prized diamond while each henchman dispatched is met with a “witty” one-liner.

It doesn’t help that all the actors have been told to clearly over-act their parts and play to the camp, ridiculous nature of the movie. George Clooney is a poor choice for Batman and Bruce Wayne and doesn’t remove the “charming smile” from his face in any scene. Chris O’Donnell’s Robin whines his way through the movie while new recruit Alicia Silverstone gets the flimsiest transition into “Batgirl” any movie could have attempted.

It is infuriating because the two key villains are very well cast and great choices for cinematic foes. Arnold Schwarzenegger as Mr Freeze could have worked had they not made him a cartoonish, pun-riddled joke. His motivation to save his dying wife and search for a cure makes for a conflicted villain who could have posed serious moral questions. Instead he becomes a maniacal goof who wants to “freeze Gotham and then the world!”

The same can be said for Poison Ivy. Uma Thurman is a great choice to play the plant-obsessed villain and the idea of her trying to save the environment, make the world green and remove anything damaging Mother Nature makes for great motivations. Unfortunately, it is really unclear to what her purpose in the film is than to look sexy, wear a lot of green spandex and blow CGI dust in every character’s face.

This lack of development extends to other storylines which have potential too. The rivalry between a controlling Batman and a developed Robin is nothing more than silly bickering. A storyline which has pathos and real emotion in Alfred dying could have been used to great effect but is resolved as quickly as it is discovered.

Rather than focus on a great script, proper villains with clear motivations and storylines which people will be invested in, Schumacher focuses on the spectacle of the movie instead. To his credit, the movie looks great. The effects are very good, the scenery and Gotham itself are vibrant, almost living creations but it is sugar-coating a movie with very little depth which just gets Batman so very wrong.

Overall, somewhere under all the camp, silly, goofy “fun” which Schumacher has smeared his second sequel with, there is a good film. Some proper character development, a decent story and less “jokes” could have gone some way to making Batman & Robin a decent movie. Unfortunately, what Schumacher delivered was a film with lots of spectacle and cool special effects which falls flat in delivering what people want from The Caped Crusader.