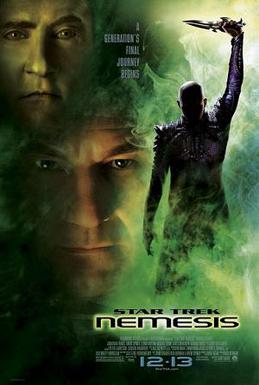 There are a couple of surprises in Star Trek Nemesis. The first is an early appearance by Hollywood megastar Tom Hardy, playing the villain of the movie. The second is that Tom Hardy is supposed to be a “young” Patrick Stewart (although it seems more credible than James McAvoy).

This is due to a very interesting thread throughout the story of the final Next Generation Star Trek movie. The idea of “nature vs nurture” is an interesting one which has been discussed and debated many times before. It is handled within a plot about clones, betrayal and secret plans but handled well nonetheless and offers something fresh to a Star Trek story.

The fact it is handled in a few different places is also refreshing. As well as a “young and old Picard” you also get two Datas (both played by Brent Spiner). The movie knows what it’s core idea wants to be and runs with it successfully. Unfortunately, the glue holding the rest of the story together lacks the same depth.

Once the ideas of “nature vs nurture” are introduced and somewhat developed, the movie becomes the usual generic “villain wants to destroy a planet” fare which has been the story-line in many of the franchise’s films before. It is elevated slightly because Tom Hardy is so good and the early promise of the career he is demonstrating now is clear. Add to this able support by a heavily hidden Ron Perlman and you get some villains to root against.

It isn’t hard to side with the returning Enterprise crew either. Their stories have moved-on well, with some now captaining their own ships while others are getting married and starting new lives. It feels like a catch-up with old friends but hardly the event which the classic crew movies always managed to capture.

This extends to how the rest of the film is handled as well. It never really feels like anything more than an extended episode of the TV show. It isn’t event cinema like the returning cast of one of the most popular science-fiction shows should be. There are attempts to give the events of the story more impact, especially with a finale sacrifice but the action and story are never more than generic Star Trek fare that has been shown many times before.

Overall, Star Trek Nemesis has some very good ideas. For starters the plot has a central idea with many different possibilities and a villain played by a accomplished and interesting actor. Unfortunately, this is then undone with a generic Star Trek movie, which doesn’t utilise any of it’s promise and delivers a story that has been seen and done, by the Enterprise crew, many times before.