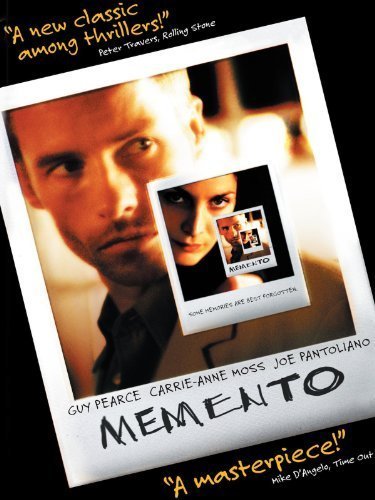 Memento is a movie which shouldn’t work. It is a story told backwards, trying to help the audience see things from the perspective of central character Leonard, who has a condition which means he has no short-term memory. This means that each scene ends with the beginning of the last and although this initially takes some getting used to, once you get your head around it, you have one the most intelligent and smartly written mysteries.

Memento is a murder mystery of sorts. Guy Pearce’s Leonard is trying to discover who killed his wife and has only tattooed clues to help him. He trusts no-one, which is understandable because he can forget them in an instant and not remember he has already met them. This makes for quite a disconcerting movie when the other two principle characters seem so at odds with each other.

For starters there is Teddy, played by the ever brilliant but completely under-rated Joe Pantoliano. He is a “cop” helping Leonard solve his case. The other side of that coin is Carrie-Ann Moss’ Natalie, a damsel-in-distress who seems to know far too much about Leonard. Who killed his wife? Who can he trust? All is revealed, slowly and at the same time Leonard remembers.

It is one of the most twisted and well-plotted movies. It drip-feeds perfectly and at points you believe you are following the story only to be side-swiped with another reveal. This is much to do with Moss and Pantoliano who seem to play at least two different versions of their characters and keep Leonard (and the audience) guessing.

This is down to some fantastic direction from Christopher Nolan. Pre-Dark Knight, Nolan handles what could have been a muddled mess of a movie perfectly. The editing is done to an inch-perfect degree and staged in such a way that the way one-scene ends can be changed in just a five minute piece of story-telling.

It helps that the lead-actor is as accomplished as Guy Pearce is. The actor is never off-screen and does some great heavy-lifting, which involves action, shoot-outs, constant bewildered confusion and tense, nervous acting, especially in moments when he is alone. He also tells a great story to inter-cut the main plot which feels inconsequential but leads to one of Memento’s many great twists.

It is difficult to convey how good Memento is without giving too much away and it is best to go into this movie knowing very little. There are plenty of clever switches and twists and the resolution to the central mystery will amaze many and keep people guessing. This movie never confuses or loses you (if you pay attention) but you can be forgiven for thinking you may have missed something on at least the first watch, not that this is a criticism.

Overall, Memento is a clever, unique but brilliant mystery thriller. The illness suffered by the main character, an excellent Guy Pearce, is conveyed perfectly and although it can be quite disorientating, the unorthodox style in which the movie is filmed just adds to the compelling central plot and it’s many twists and turns.