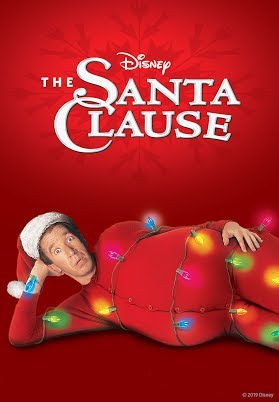 It is strange to look back at a time when Tim Allen was a draw for something other than voicing a famous toy spaceman. The Santa Clause doesn’t just capture that moment but also demonstrates why, showing the comedy talents of the actor at his best here.

Tim Allen isn’t playing anything other than the Tim Allen from Home Improvement, sarcastic, quick-witted and charming in a slightly obnoxious way. His character clearly has a heart of gold but it is buried deep, which is why trying to turn this man into Father Christmas is such an interesting concept.

That whole process in the first act is what makes the movie so enjoyable. The process of Allen’s Scott Calvin delivering presents with his wide-eyed and excited son is some of the best moments of the movie. Allen performs each scene with the disbelieving, exasperation which made his such a popular character in Home Improvement, from chastising a newly woken child to some slapstick delivering a canoe.

The “magic” of how Santa delivers these presents is all explained very well and there are some clever moments to help address the more ridiculous aspects of the holiday character. Suspension of disbelief is required but always is when dealing with Santa Claus. Or more specifically The Santa Clause.

That is the other clever element to the movie. The clause which makes him Santa and transforms Tim Allen into the jolly fat man over the course of the year is the crux of the story and helps keep the movie funny. From shaving constantly, bizarre weight gain and knowing everyone who is naughty and nice, there is enough subtle elements for Allen to work with and keep the movie entertaining.

It also helps that the rest of the cast pull their weight too. Judge Reinhold is always good for a supporting character, especially one as clueless and disbelieving as he is here but it is Tim Allen’s son, played by Eric Lloyd, who adds extra magic to the movie, holding his own against the adult actors and delivering some of the funnier lines.

He is also the heart of the movie which begins to believe that Allen’s Scott Calvin is “crazy” for believing he is Santa Claus and tries to pull at the heart strings. It is in this third act which the film loses it’s way slightly. Allen makes some questionable decisions and worse, the movie’s issues are neatly resolved with a five minute conversation and a complete change in opinion!

Overall, The Santa Clause is a clever, funny vehicle for the now-forgotten talents of Tim Allen. He makes good use of the set-up given to him and also makes a surprisingly convincing Santa. The story has some entertaining moments but loses it’s way with the finale.