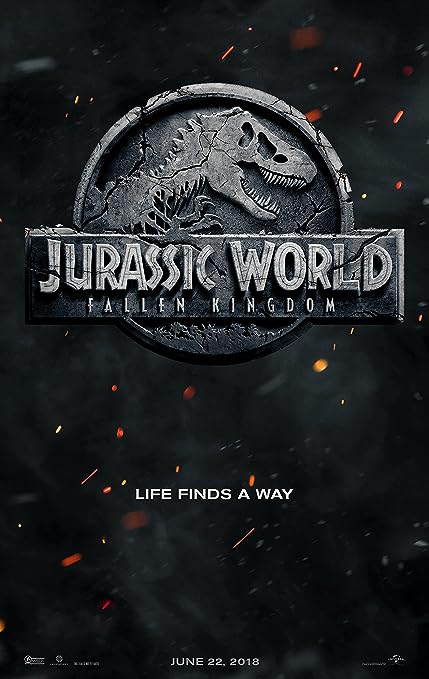 Jurassic World got lucky. Back in 2015, Jurassic World essentially remade seminal classic Jurassic Park but added three key aspects; they opened the park, created a brand-new hybrid dinosaur and made Chris Pratt the lead. It was a great movie and finely balanced nostalgia with the thrills of dinosaurs chasing people. It would seem impossible to do again but they’ve tried and Fallen Kingdom, although not Jurassic Park, does manage to hold it’s own in the series.

The signs that this movie could be a rival to the best of the franchise occur within the first ten minutes. A poorly conceived expedition to the island that houses the now defunct Jurassic World has within it the terror, spectacle and impressive set-pieces that make Jurassic Park such an amazing movie. This then continues for the next thirty to forty minutes as we reacquaint ourselves with heroes Chris Pratt and Bryce Dallas Howard.

Through the usual thinly conceited reasons, the two are back on the island but this time trying to save the dinosaurs from a volcano that could render them extinct (again). What this does give us is a slice of the best Jurassic World has to offer. It has dinosaurs of all shapes and sizes, intense chases, amazing set-piece escapes and the incredible action that involves a volcano erupting, dinosaurs fleeing and our heroes just trying to get away. All of this is the best the series has ever been since the original and genuinely holds you teetering on the edge-of-your-seat.

Even when the action narrows itself to just containers on a ship, the movie still holds it’s intense grip upon you. One sequence involving a T-Rex inside a shipping container manages to balance humour, action and a very cool moment so perfectly you’d think Spielberg was back behind the camera.

Unfortunately, the movie manages to make it’s one major mistake: it takes the dinosaurs off the island. Although it never widens it’s environment too far, the fact that the story is not within Jurassic World/Park, does mean that it loses some of the magic and suspense it has worked to well for so far. Instead we now rely more on the characters to help the story progress and some of these are successful while other falter.

Pratt and Dallas Howard slip back into their roles comfortably. You believe in them as heroes and want them to succeed. The same can be said for two newcomers to the hero side; Justice Smith as a computer-geek and Daniella Pineda as the Dinosaur Vet. These two are different enough and well-written enough to add something new rather than just becoming faces that you predict won’t make to the end credits.

The same can’t quite be said for the compulsory “Jurassic Park child,” this time played by Isabella Sermon. She serves nothing more than to be a plot-complication and although she has a story which could have interesting angles, it is breezed over and under-developed. Just as the villains are; particularly the slimy Eli Mills played by Rafe Spall. To his credit, you do want to see him get his comeuppance but the scenes where he is snarling and panicking don’t do enough to make him a compelling character.

Luckily, Fallen Kingdom has dinosaurs and this will always be where the movie is untouchable. Even in it’s lesser second half, there are still some amazing sequences involving the creatures. This film takes the franchise back to it’s roots. At times the dinosaurs are used for comedic effect and this is done well while at other times, they are used for the terrifying beings that they are. The film still holds your interest because watching these dinosaurs hunt the principle characters will never get old.

That is the secret to Fallen Kingdom and the “Jurassic” Franchise in general, these creatures still amaze. The score is used to fantastic effect and there are times when you will watch open-mouthed as the T-Rex roars or in one heart-breaking sequence, the volcano takes a poignant final victim. As long as Fallen Kingdom can still make you feel the way you did when you watched Jurassic Park, it will always be a success.

Overall, Jurassic World: Fallen Kingdom is no match for Jurassic Park and doesn’t quite reach the levels of Jurassic World but does come close. When the movie is focused on the dinosaurs, on the island and with a huge volcano erupting, it is a great movie. The second half makes a poor error though and although it loses it’s way, it still retains enough of that original Jurassic Park magic.