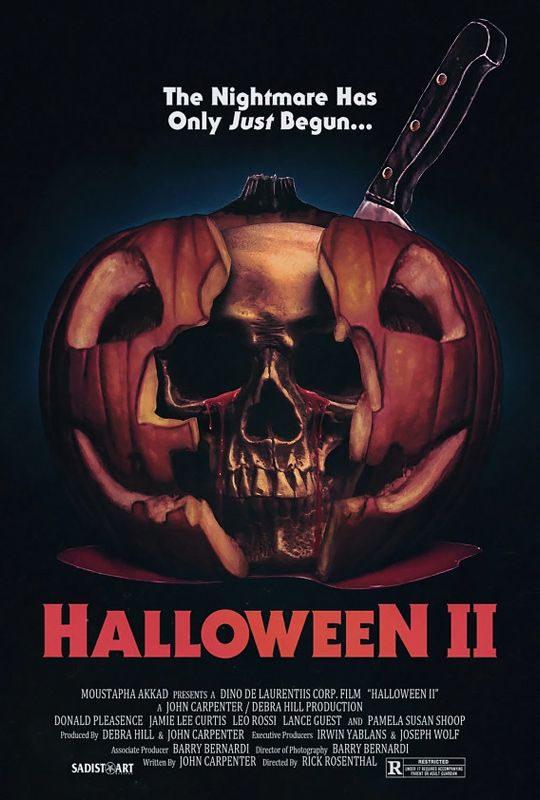 There is a great idea at the centre of Halloween II that doesn’t quite work. Unlike many other sequels, especially ones with a gap as large between movies as this one, Halloween begins almost immediately after the last film. The Halloween in question is the same Halloween from the first movie.

This works well. At the end of the first movie Micheal Myers was shot but then disappeared, leaving the possibility for his rampage to continue that night. And continue it does, except it never really feels like the same Micheal Myers doing the killing.

Micheal Myers is a good slasher villain. He is seemingly unstoppable, strong and relentless. In the first movie he used brunt force with his kills, breaking through objects and doorways and stabbing unrelentingly. That aspect of Micheal Myers does return but this version is also more of a calculated killer and kills feel more staged.

The setting lends itself to this development well. Halloween II is mainly set inside a hospital, coincidentally the location where Jamie Lee Curtis’ Laurie Strode is recovering from the events of the previous movie. This means you get some great, inventive kills involving therapy baths, blood-letting and needles. The problem is, that doesn’t feel like the same killer who was angrily stabbing his way through unsuspecting babysitters in the first movie.

Which is also why Halloween doesn’t feel like a proper sequel to the original movie. In just it’s second outing it falls into the same tropes and traps that many other slasher movies have used before. People make stupid decisions, Michael Myers is a huge, lumbering killer that is never spotted until the last moments. Curtis’ Laurie is injured and drugged but can still outrun her pursuer. All of these make Halloween II feel much more generic than the more tense and inventive original movie actually was.

It also makes some bold moves with the mythology of Micheal Myers. Donald Pleasence returns as Myer’s psychiatrist in an effort to build the monster that terrorises the cast but now they are adding motive, namely that Laurie is actually Myer’s sister. Rather than add anything to the film, it manages to detract, making Myers less of a threat than a man killing for no reason.

Overall, Halloween II isn’t a bad movie but it does fall into the generic slasher horror genre. It has lost what made it such an original and iconic film in the process and wastes a clever story-telling device. It is a decent horror movie but not a good Halloween movie.