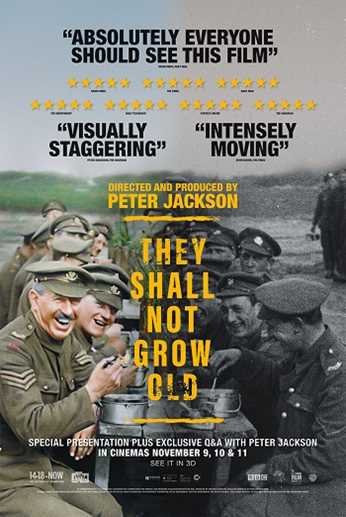 There is something very simple about adding colour to black and white footage but somehow this technique brings the First World War to life in a way not realised before. It makes the event feel much more current and not over 100 years ago. It also adds a great deal of empathy to the events depicted and you feel brought much closer to the people the footage is featuring.

Peter Jackson is the director behind the documentary and he has put together a coherent and well-edited story. It tells the tale of the war from the people directly involved. There are no talking-heads, historians or experts involved in the explanation. Instead it is narrated by hundreds of British soldiers who fought in the war, all taken from archived interviews held by the Imperial War Museum.

This narration alongside the newly restored and coloured footage tells a compelling story. It covers the whole war, from the declaration of the conflict to the soldiers coming home. There is nothing left untouched here. The movie touches upon the conditions in the trenches, from the horrific injuries through to the more comical toilet situation. You hear from soldiers who were haunted by the war, those that more easily forget and others who didn’t want to come back. Each narration is a glimpse at what these men went through and is chillingly effective at times.

The footage itself is always interesting. The movie-camera was a relatively novel invention at that time, especially as portable as it would need to be for the battlefield, so the soldiers are never fully relaxed to begin with. Seeing them smile and play-up for the camera holds a great charm and almost plays against what you’d expect from soldiers in a conflict. At other times it is as cold and harsh as you’d expect; particularly when describing specific battles and the horrors of facing the machine gun head-on.

What it does is brings the horror and reality of war to life. It brings it up-to-date and makes it feel much sooner than 100 years ago. It also leaves you with the feeling of what these men sacrificed. This is a glimpse at the past that is rare and getting rarer with every passing year but Jackson has managed to deliver something which feels brand-new.

Overall, They Shall Not Grow Old is a compelling look at the First World War in a unique way. Colouring the footage adds a new depth of realism but doesn’t take away from the shocking but effective narration offered by those that actually experienced it. An essential watch.

One thought on “WW1 and Documentary Month: They Shall Not Grow Old (2018) Review”