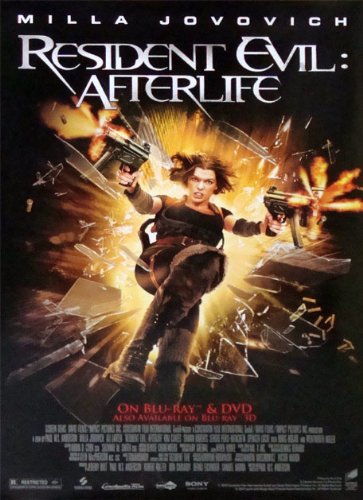 Just as you thought the Resident Evil couldn’t become any more generic and fairly repetitive, director Paul W.S Anderson pulls a surprise out of the bag. Resident Evil Afterlife is a breath of fresh air in a stale franchise, doing something slightly different while also building and beginning to develop the world which has been created so far.

The first master-stroke is to set the movie in a single, more claustrophobic setting: namely a prison. A prison itself has plenty of great opportunities and perfect locations for some decent set-pieces, which Afterlife does take advantage from in places. There are some cool scenes involving crashing planes, hordes of zombies and huge explosions. Not to mention the fact that Milla Jovovich has got being a kick-ass hero down to an art now and here her character of Alice is as cool as she has ever been.

Her character may not be the weakest but it certainly isn’t the strongest as Afterlife also adds some more key players to it’s ever-growing ranks. The prison already has survivors and they range from the noble and heroic (Boris Kodjoe’s Luther) through to the slimy (Kim Coates’ Bennett) down to the reliably bad-ass with returning Ali Larter as Claire Redfield.

The most interesting story is by far the prisoner who has been left to rot. Alone in a poor Hannibal Lecter style cell is Wentworth Miller, who brings his experience of breaking-out of prisons to a new style of character. You are never sure whether he can be trusted or not but his story does become fairly interesting and will give fans of the original video-games a surprise character to root for.

The best of Resident Evil is in the action though and here we get some great sequences. Escaping the prison itself is full of cool moments and failed plans, making for one of the more tense and slightly more intelligent instalments in the Resident Evil franchise. You also care for these characters so when deaths and key moments do occur, it actually has a larger effect, which is a first for the series.

As great as some of the key sequences are though, the fact this was filmed with a special 3D camera does mean that it has dodgy slo-mo sequences at pivotal times. One key battle between Alice and Claire against a giant axe-wielding zombie is great and has cool choreographed moves but suffers badly from everything having to be slowed down as debris flies towards the screen.

The ending also lacks the creative edge the rest of the movie benefits from. The ongoing saga and conspiracy rears it’s head once again and we are led back into another white laboratory to fight faceless goons and dodgy clones. This finale is better than any of the others but does bring the movie down to a level it feels like it surpassed with it’s first two acts.

Overall, Resident Evil Afterlife is a highlight of the series so far. It has interesting characters, a better setting and some developed sub-plots which will keep the interest. The action is great but suffers from 3D pampering while the finale goes back to the generic roots of previous instalments.