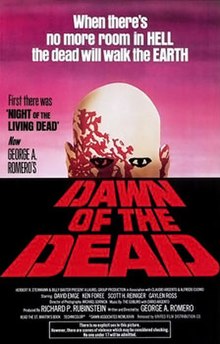 The people that herald the late George A. Romero has a zombie master are clearly referencing Dawn of the Dead. This is the blueprint for how to make a zombie movie work. It has everything from “classic” zombies, clear rules for how they change and infect, a core group of characters who are distinctively different and have been thrown together to survive and (probably because it was the first to do it) makes all of the tired cliches look fresh.

Romero tells a great story here. He sets the zombie world perfectly with a prologue involving clearing a building of the zombies and criminals. It touches upon race, poverty and humanity in one ten minute scene. It also introduces us to what appears to be the heroes of the movie in Scott Reiniger’s Roger and Ken Foree’s Peter. Although these are more like anti-heroes, out for themselves and for survival rather than trying to help their common man.

That is one key area that Dawn excels at. The characters are clearly defined but with shades of grey. David Emge’s Stephen is a coward who develops a spine as the film progresses, while Gaylen Ross’ Francine holds her own secret which plays a key part as the story rolls through. These characters work because they are so poles apart and it makes for some interesting developments as they establish a home for themselves in their makeshift location.

The location itself is genius. The shopping mall makes for a great zombie location and has plenty of potential horror, comedy and great story-telling devices. From the make-shift weapons found in a mall, through to the looting and setting-up of a life that these people manage. It works so well that you start to believe they could actually survive the apocalypse after-all, and do so in style.

Romero is never shy to hide underlying messages in his movies though and Dawn of the Dead is no different. The commentaries on consumerism are not subtle and the dialogue demonstrates as much at times. It is a movie that any film-student could dissect with little effort but it does add an extra layer to what easily could have been a straight horror movie.

Not that Romero doesn’t craft a fine example of a horror movie. It has some great set-pieces and conveys the ongoing, non-stop onslaught of zombies very well. As with all zombie movies, anyone could be a victim and there is no clear idea of who the heroes are and who will survive the movie. It keeps you on your toes and is clearly the blueprint for all other zombie movies that follow (including Romero’s own).

It isn’t perfect though. You do have to over-look some fairly dodgy acting. The main heroes have a tendency to over-play their acting hand slightly and hysterics is the landing point for most of the more dramatic and action-focused scenes.

Overall, Dawn of the Dead is a masterclass in a zombie movie and how to craft a decent horror film. It has great characters, an interesting setting and a story which develops into more than just a simple horror film. Poor acting aside, this is one of the best zombie movies there is.