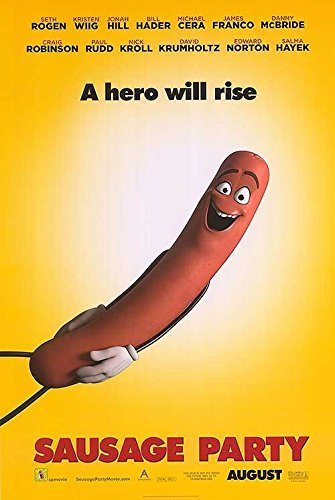 Sometimes you are just in the mood for crass, obnoxious and offensive toilet humour with very little redeeming quality than it appealing to the most immature part of your funny bone. When this is the case, you could do a lot worse than Sausage Party. However, to immediately write it off as one long, protracted and repeated “dick-joke” may be missing part of the point.

Sausage Party is a clever idea to hang this sort of movie upon. The idea that food believes it’s sole purpose is to reach “the outside,” not realising that this would lead to their cooking, mutilation and devouring by humans is a great one ripe for comedy. It is played well, with delusion being the key point of humour for the initial scenes as we get to know each character but namely Seth Rogan’s Hot Dog Frank and Kristen Wiig’s Bun Brenda. From here it is the not so subtle sex jokes about Dogs in Buns and “just the tips” which set the stall out on the kind of humour you should expect here.

The main plot of the story is to get Frank and Brenda, and some other food stuffs they pick up along the way, from one part of the supermarket to their respective aisle so they can be “chosen”. This means a journey through the aisles where they encounter national stereotypes through food stuff (a taco is mexican, a bag of Grits is African-American) while touching upon stoners, Nazis and a deranged douche. There are jokes aplenty and some hit the mark perfectly while others are too crass or too brutal in their delivery. The sort of mood you are in will dictate how well you appreciate this part of the movie.

There is a deeper level to Sausage Party though. There are jokes which land perfectly because they are so clever. One scene involving a trolley tipping and the food falling riffs on Saving Private Ryan brilliantly while a sub-plot involving Michael Cera’s smaller Hot Dog Barry is darkly funny and has clever comedy moments of it’s own.

The plot itself touches upon surprising themes. There are commentaries on social divides, the idea of religion, faith and belief and even a bold look at the Middle East situation between Muslims and Jews. It doesn’t try to solve any issues or say anything profound but it does mean the humour goes places other than the toilet.

Until the end that is. Once the main story seems to be resolved, the movie takes a very strange and weird turn. This is where it goes one step too far and even the most crass of senses of humour may struggle with the general direction the finale takes.

Overall, Sausage Party is as funny as your mood when watching allows. It is toilet humour, offensive and sick in places. At other times it is very clever and uses a decent starting concept to good effect. There are social, political and religious issues touched upon too but this is undercut by a bizarre and frankly gross ending.