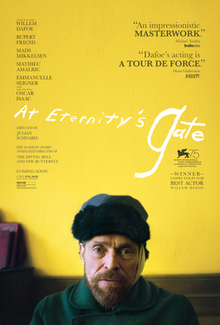 When looking at synopsis for At Eternity’s Gate you will find many summarise the movie as: “A film about the years Vincent Van Gogh spent painting in Southern France.” This hardly fills anyone with excitement or intrigue and unfortunately, the movie never seems to develop past this fairly mundane plot. This does exactly what it says it will but rather than delve deeply into an interesting point in the famous Dutch painter’s life, At Eternity’s Gate instead slows the movie down and develops it’s character at a snails pace.

There is a very interesting tale to be told here. Van Gogh was a man who struggled with depression and mental illness right up to his bizarre, early death. His paintings never got the recognition they deserved when he was alive and it is well-known that this plagued and frustrated the artist. There is a story to be told but At Eternity’s Gate is a very plodding movie. It prefers a long, mundane take where very little seems to happen. It does touch upon Van Gogh’s moments of madness and then moment’s of bliss but by having him run through a field or lay quietly with soil poured upon his face.

At times the movie is painfully boring. It just doesn’t move with any purpose and feels like it is taking in the peace and quiet alongside Van Gogh himself. It does mean that the moments when events do seem to be ushered along have a bigger impact though, from the fiery relationship with Oscar Isaac’s Gauguin through to the literal and subtle battles with Van Gogh’s own personal demons.

Willem Defoe is the movie’s triumph. He plays Van Gogh so well that you’d think there was hours of footage to study. Defoe can be strangely wired, serene and panicked all in one scene and demonstrates the pain that Van Gogh went through effectively. He is one of the reasons the movie does not fail completely, as Defoe offers a subtle descent into the sadness and depression that would ultimately bring Van Gogh’s life to an end.

It is just a shame that Defoe’s performance alone is not enough to make the movie entertaining. The film does look at the struggles of the tortured artist, sometimes through abstract means and sometimes through exchanges and quiet discussions. Nothing really helps get under-the-skin of the character enough though and you are left wondering if more could have been done to truly explore the man’s life fittingly.

Overall, At Eternity’s Gate is worth watching for the performance of Willem Defoe but it is not entertaining or engaging. There are some key moments which will wake you from a slumber but they come too few and far-between in a movie which should have done much better with such an interesting life for source material.