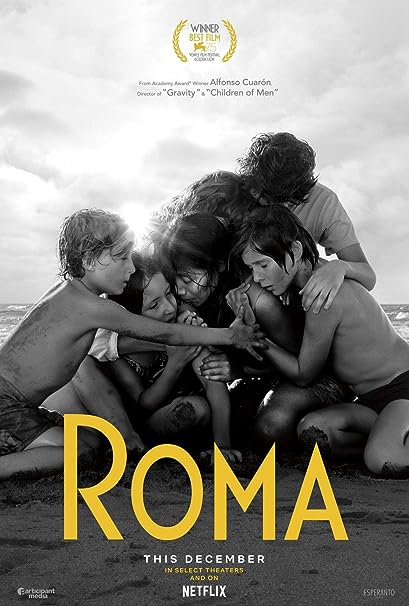 Whether you enjoy Roma or not will be entirely dependent on whether you enjoy movies that lack any actual narrative. To say that Roma has no story may be oversimplifying things slightly and a disservice to director Alfonso Cuaron but if you had to pinpoint the exact story Roma is telling, you would struggle to make a compelling case for watching the movie at all.

Roma is never boring. It hardly grabs you from beginning to end either though and Cuaron is very comfortable to let the movie plod along, slowly unfolding the events rather than trying to push any kind of urgent story. This can be quite endearing and it certainly helps us build some relationships with the characters and see the structure to which their lives operate. At other times you long for a scene to do something or go somewhere.

This comes from the movie’s structure. It focuses on the experiences of live-in house-maid Cleo. Cleo cares for the children, cleans-up after the family and prepares food for her employees. She is part of the family but at a distance. She is invited in to their world but never too close, and all too clearly paid to be part of their company. It makes for an interesting way of watching the central family’s story. We are part of the narrative but on the fringes. The movie feels like it is happening around Cleo rather than directly involving her.

This doesn’t mean she doesn’t get her own personal story. There is a central story-thread for Cleo and it is a compelling one, with dramatic ups and downs and a heartbreaking conclusion. This story can sometimes fade into the background though and only plays a bit-part in the wider movie, which often feels infuriating when you want the story to deliver so much more.

Cuaron has made a name for the inventive set-pieces. From the long, uncut takes in Children of Men or the seemingly impossibly long takes in Birdman, Cuaron has proven a director capable of bringing incredible moments to life and Roma has a few of these as well. A riot in the streets becomes a terrifying ordeal for our heroine, while the final scenes on a beach will have you on the edge of your seat, praying for the positive outcome rather than the ominous negative one.

These moments come few and far between though and instead we get a interesting film but one that doesn’t hold your attention as effectively as it could. There is a great story here which the audience are eventually allowed to be privy to but it comes to little, too late.

Overall, Roma is an interesting way of framing a movie, from one character’s point of view on the fringe of the story, but this isn’t done effectively enough. The story is compelling but we are not allowed enough of it to become truly invested until it is too late. A missed opportunity.