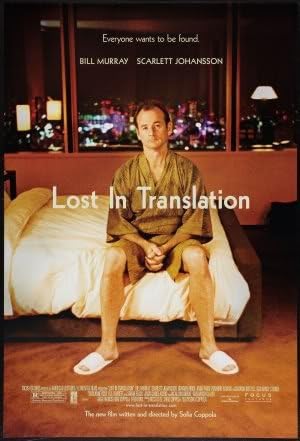 I am a person that is of the opinion you could watch Bill Murray read a recipe for home-made tomato soup and it would be entertaining. That is one of the biggest and most positive attributes that Lost in Translation has, Bill Murray cannot help but light-up a screen and be entertaining.

Luckily, he is given ample opportunity here, in a film where he plays an ageing actor doing a commercial in Japan. This means we get a lot of scenes where Murray is a fish-out-water, misunderstanding the language and struggling with loneliness. Scenes where he is trying to be suave while following direction he doesn’t understand or navigating cafes and bars are all entertaining because Murray makes them so.

The second-lead in the film is Scarlett Johansson. She is struggling with the same issues, feeling alone in a country she doesn’t understand. Her experiences ramp up the loneliness and are played a lot less for laughs but when she is on-screen with Murray, the chemistry is fantastic. They talk so effortlessly and the film works because the two are very likeable and you want to get to know them as they get to know each other.

This is a film about two very different people bonding over their own loneliness and feeling of separation from everyone around them and in this respect it works very well. It takes it’s time to build the relationship between the two and moments are often sweet and sentimental, like Murray putting a tired Johansson to bed or letting themselves get swept away at karaoke. It makes for the finale of the film, where it takes a slightly different turn to what you may have expected, have much more of an impact.

Unfortunately, in building such a great natural chemistry and realistic relationship between the two, you also have to endure sections which feel plodding and dull. Not every scene works as a build to the relationship and it feels like some of the quieter, more sombre moments could have been stripped back without losing any of the major story-beats. The film won’t hold you to the edge of your seat but you will be entertained as the leads find their feet in Japan.

Overall, Lost in Translation is a great showcase of how Bill Murray can make anything entertaining. Not necessarily a typical vehicle, he makes this very watchable while also sharing great chemistry and building a believable on-screen relationship with Johansson. Slower and more plodding aspects make this a drag in places however.