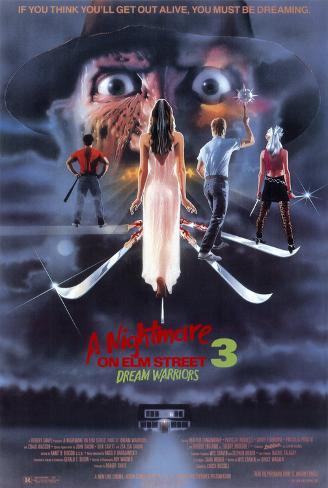 After what felt like a strange detachment from the series with Elm Street 2 (Freddy’s Revenge), Dream Warriors, the third instalment in the series, takes the movie franchise back to it’s roots and firmly into what made the original movie so iconic. There is very little in the way of the huge concepts here. It feels very simple and back to Freddy Kruger killing teenagers in their dreams… and it is so much better for it.

It isn’t just the simplicity of the concept either. So much of this movie works because it plays off the basic, horrifying premise of it’s villain. The teenagers are no longer in their own homes but now in a mental health hospital, where being sedated and forced to sleep is a common occurrence. It is also an institution trying to treat them medically when their issue is far from health related. This is until a character from the past enters.

The inclusion of Heather Langenkamp as the hero of the original movie, Nancy, links the series together and adds some credibility to this sequel that the second instalment was lacking. It also means we get someone who believes and can avoid the exposition and pointless recap scenes that plague other movie sequels with a specific, core concept. She will also be the key to saving (or not, as it seems) the teenagers plagued by Kruger.

As with any of the Elm Street series, the teenagers all fit into neat stereotypes and easy to access character traits. There is the innocent, every-girl heroine (Patricia Arquette’s Kristen), the bad girl (Jennifer Rubyn’s Tarin) and even the strong rebellious black kid (Ken Sagoes as Kincaid). Cleverly, their character and backgrounds play into their deaths as well. For example, one character who wants to be on TV is killed by her dream career while a puppet-making teenager is turned into the one thing he creates.

This is an aspect of Dream Warriors that is thankfully back: the creative deaths. Kruger dispatches his new victims with their own nightmares, in gory, clever and in some cases, even funny ways. Robert Englund returns on form as Kruger and is given more freedom to be a wide-cracking killer rather than just the creepy, almost silent protagonist from the first movie.

That doesn’t make his threat any less and the kills are still as disgusting and freaky as always but unfortunately, Dream Warriors is never actually scary. There are moments that will make people look away from the screen but you’ll be hard-pressed to actually be “haunted” by Kruger and the Elm Street movies after you’ve finished watching them.

What it doesn’t struggle with, which the first two movies did, was how to end the films. There was always some convoluted way to “kill” Freddy and it was always a messy finale. Dream Warriors doesn’t have a “neat” ending and the killing of Freddy does take some doing but at least it makes sense and it straight-forward, leaving no random ambiguity or confusion to what just happened.

Overall, Dream Warriors in the best in the Elm Street franchise so far. It has all the best aspects of the original movie, from the creative kills, a decent setting which plays into the horror and Kruger himself on form. Although it isn’t scary, it is certainly entertaining.