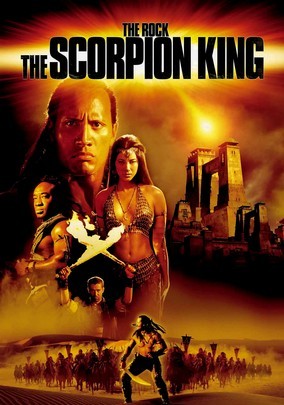 If there was ever a franchise that did not need a spin-off, it was the Brendan Fraser series The Mummy. Somehow, Dwayne Johnson, then known solely as The Rock, made enough of an impression as a CGI’d head on a massive scorpion that Universal Pictures decided to give the wrestler turned actor his own sand and swords style movie. What they received was a generic, if not awful, fantasy film.

It pretty much goes without saying that Dwayne Johnson is the best aspect of the whole series but what The Scorpion King manages to do is demonstrate how far The Rock has come in terms of acting. Here he is a muscle-bound warrior delivering one-liners and poorly written exposition. He does this well and the star-power even back in his very first major role, is clear.

This means that the action sequences and the battles between Johnson’s assassin-for-hire and the many faceless soldiers sent his way, are all staged perfectly well. He is a competent action-hero even then and although his acting comes across as slightly forced, there is a charm to him that explains why he is such a success today.

Unfortunately, his star-power wasn’t enough to build a whole movie around him and The Scorpion King doesn’t have enough to elevate it above b-movie levels. It has a despicable villain, played with all the usual grimace and snarl by Steven Brand, as well as a damsel-in-distress who starts as a target for our hero and soon, predictably, becomes a love interest. The fact that she spends most of the film practically naked, wearing the most impractical clothes for a desert-adventure, should tell you all you need to know about the level that The Scorpion King is aiming for.

The characters do their jobs and the actors play them ably. It doesn’t save the writing though, which is full of cliche, predictability and all the usual plot-beats that we have seen a hundred times before. Nothing here is surprising but it never feels terrible either. It just plods along, happy to add to the many numbers of fantasy movies that are instantly forgettable.

This is because it never aspires to be more than a b-movie sand-epic. If it wasn’t for the starring role of Johnson or the links to a previous franchise, it seems that this movie would have fallen into bargain bins the world over (as did the non-Rock starring sequels). This is demonstrated best when the CGI is used to poor effect. From unconvincing fire-ants through to poorly realised snakes, the movie relies heavily on CGI at times and manages to break the suspension of disbelief by having such a poor representation of it.

Overall, The Scorpion King holds a solid debut performance from Dwayne Johnson but has little else memorable about it. The story is flimsy, the villain generic and the damsel-in-distress is cliche. There is some good action but this in under-cut by poor CGI.