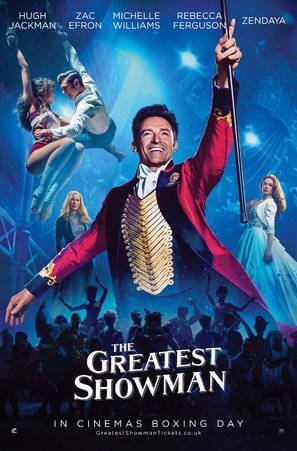 La La Land made musicals big business again by producing an Oscar-worthy movie but where that was a solid, modern love-story with musical accompaniment, The Greatest Showman is the opposite, hanging an almost flimsy story on a selection of fantastic musical songs.

Which is where the real success of The Greatest Showman lies. The songs are brilliant. They have the desired musical effect. They make you want to at least tap your feet if not get up and dance along with the stars on the screen. You wish you knew the words so that you could belt out the tunes with as much gusto as the people on the screen. In a movie with 10 to 11 original songs, very few of them don’t land with the desired effect. There is every type of musical number as well, from the large ensemble piece which rouses the spirit (the Greatest Show), to the signature love song (A Million Dreams) through to the key song that encompasses the whole movie (This is Me). You will go away with a huge smile on your face as the film does exactly what it sets out to do: purely entertain.

This is also down to the fantastic performances. Hugh Jackman is the perfect man to lead any musical. Already showing that he has talents with Les Miserables, here he can be the jovial, infectious P.T Barnum and it is clear Jackman loves every moment. He is the classic song and dance man and seems a world away from the man who played Wolverine in Logan.

He has great support as well. Zac Efron has already showed his talents in High School Musical and just develops the skills we already knew he had. Zendaya seems a million miles away from the moody teenager in Spiderman: Homecoming and performs a great set-piece number using a trapeze while the movie is almost stolen from under Jackman by “The Bearded Lady” played by Keala Settle. It is something when a film stars Michelle Williams and Rebecca Ferguson and they seem like background characters.

Which leads us to the issue the movie has; the story. There is a lot to get through and plenty of meat on the P.T Barnum story but here it is given a gentle-touch in favour for the musical platform. Some musicals have a great balance between song and story but The Greatest Showman isn’t one of them. Here the story is a slave to the songs and it is very clear that the acting-sections are just flimsy links to get to the next (fantastic) musical number.

This also goes for the stories lack of development. P.T Barnum clearly had an interesting life but most of this seems breezed over in favour for musical montage. He goes from poor to super-rich in no time and any problem is solved in the time it takes to sing a song. This also goes for other characters too. This is a film about acceptance, both physically, racially and through class divides but this seems to be another issue addressed within one song and then never really focused on again, which is a shame because with a little more care, the potential is there to examine this properly.

This is probably being slightly harsh on The Greatest Showman though as it has a clear remit: entertain. On this count, The Greatest Showman succeeds. As long as you are well aware that this will be full musical goodness, you can’t help but get swept away in what it is doing and in some cases, belting out the songs that go with it.

Overall, The Greatest Showman is a classic, modern musical. La La Land may have set the groundwork but Greatest Showman demonstrates there is room for a musical in the traditional sense. Jackman and the rest of the cast are fantastic and there isn’t a dud-musical number in there. The story suffers and it lacks development in key places but you’ll soon forget this as soon as the lady with the facial hair starts singing This is Me!