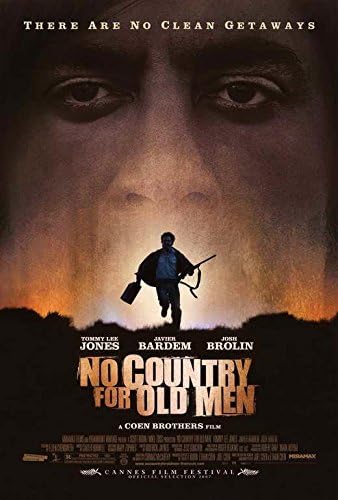 I’ve never been on the Cohen brother’s bandwagon. Where some people see genius, I see convoluted plotting, snail-pace story-telling and sometimes arrogant stylised techniques. Aside from the True Grit remake and parts of The Ballad of Buster Scruggs, I don’t particularly rate the Cohens.

No Country for Old Men is regarded (alongside Fargo for many) as their crowning glory. From the beginning, this felt like the film to change my mind on the directing brothers. The story is a simple one, man finds money, man tries to keep money and is then hunted by a fantastically terrifying assassin. Add a local grizzled Sheriff always one-step behind and you have an effective, modern Western.

The cast help with this compelling plot. Josh Brolin is the man out-of-his-depth as he finds himself hunted and relying on his fairly impressive wits to ensure he stays one step ahead. Tommy Lee Jones is the Sheriff and the role sits comfortably on him, calm and focused, bringing some civility to the proceedings as he pieces together the trail of dead bodies.

The real triumph here is Javier Bardem. This role sees him play a cold, unshakeable villain who instantly enters the pantheon of the best bad guys. His method of using a compressed air canister to dispatch sometimes innocent victims just adds to his mystique, alongside his dodgy haircut. He helps you root for Brolin’s less than heroic lead in a classic Western style.

It makes for some amazing, tense moments as the two clash with shoot-outs across streets, through the walls of hotel rooms and in one of the best scenes, try to outwit each other with a simple conversation down the phone. It begins to build to what promises to be a fantastic finale, where clearly one man will be left standing.

Which is when the Cohens work their magic and that arrogant style creeps back in. No Country for Old Men is a film without an ending, or at least without a satisfactory ending. The movie builds so well to what could be a great three-way shoot-out but instead the movies ends with a damp, cryptic monologue and worse, an off-screen death which seems to make everything that happened before meaningless.

Overall, No Country for Old Men builds and builds in such a way that it feels like Cohen’s five star classic but then they work their signature magic and undercut everything which has gone before, wasting the great potential and fantastic cast, by under-selling the finale and leaving the movie needing so much more.