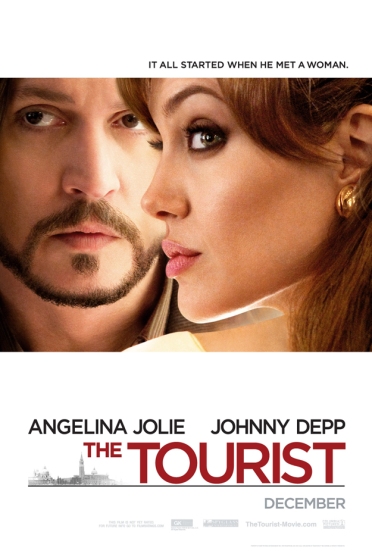 When is the last time you saw Johnny Depp play a “straight” or “normal” role. What I mean by this is when is the last time he wasn’t covered in make-up, acting goofy or part of a cast/movie which required him to play an eccentric. Don’t get me wrong, Depp is fantastic in those roles. There is no doubting that Pirates of the Caribbean would be nothing without him and that he was clearly the best thing in Charlie and Chocolate Factory (even if his take on Willy Wonka wasn’t how I’d have interpreted it). I saw the new trailer for Dark Shadows, the new Tim Burton film, and sure enough, the colours are all whites, blacks and gloomy and Depp is very heavily made-up, again!

As I was starting to watch The Tourist, it struck me that I don’t know if I could actually recognise Depp’s voice. I haven’t seen that many interviews with him and whenever I usually see him he is playing a character that needs a specific voice. That is when I asked myself the original question, when was the last time I actually saw him play a “normal” character? I thought back and realised that the last time was probably, at a push, From Hell. Even then he was putting on a British accent.

This meant that watching Johnny Depp in The Tourist felt like a bit of a novelty. I was going to see Johnny Depp play it “straight.” No extravagant make-up and no ridiculous accent. Not even walking with the trademark swagger that one of his other most notable characters has. Instead I would see Depp play a character that was nervous, awkward, unassuming and a complete fish out of water amongst the man-hunt and deceptive games played by Angelina Jolie and Paul Bettany.

This was the second novelty. I didn’t know when the last time was that I saw Johnny Depp play the love interest. I’d never seen him play that type of hero. In fact the last time I think of him in any sort of love story role (that I remember) was Edward Scissorhands and that was hardly straightforward. So could Depp pull of a convincing leading, love interest type role against Angelina Jolie… well, yes actually. In fact their chemistry and the way they played off each other was brilliant. From the moment she sits opposite him on the train up to the final moments in the film and everything in between, the two of them seem perfectly natural. Johnny Depp plays the bumbling math teacher brilliantly and in perfect polar opposite to Jolie’s confident, sexy and assured “mysterious woman.”

In fact it is the chemistry and the comedy that comes from Johnny Depp’s “fish out of water” character that makes this film an enjoyable watch. From being chased across rooftops barefoot to being tied to a speeding boat racing along Venice canals, Depp’s panic and awkwardness as someone who is clearly out of their depth is brilliant to watch. Adding to that, watching the two slowly fall for each other as they try to get through their adventure together should make the huge, climactic finale to the film so much more exciting and satisfying.

That is where the films falters though. The story is great; the double-crossing, the confusion and Jolie’s secret boyfriend character always being one step ahead. The story isn’t very original but it does a good enough job of introducing enough conflicting elements that I was genuinely intrigued to how they were going to wrap it all up. Genuine intrigue became mass disappointment as I didn’t really get the explosive finale I wanted. In fact the film just seemed to end, limply and damp with no real payoff. Instead of romping towards a great, action set-piece with ane-top climax that I believed the film was working towards, it ended with a bit of a whimper.

I believe it wasdown to trying to be too clever with the ending, hoping the audience would leave feeling “duped” and “out-smarted” by the whole film but instead I felt cheated and all the good work that the film had done to keep me engaged throughout had gone completely to waste.

Overall, Johnny Depp can play a straight, normal character without having to hide behind gimmicks, make-up or accents. His chemistry with Jolie and the main story of the whole film make this an enjoyable watch for 90 minutes. Unfortunately, a need to try to be too clever with the finale left me feeling a bit cheated and dejected.